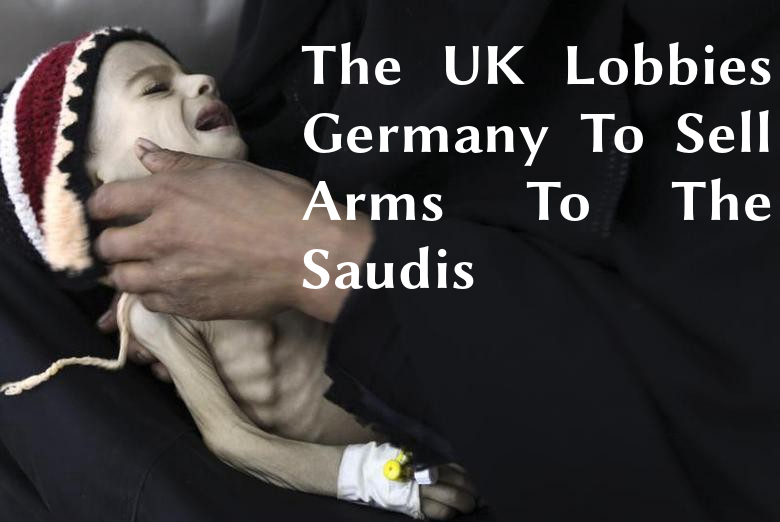 It is not enough for the UK to routinely violate the sovereignty of other nations. To work hand in glove with the United States in suppressing popular movements and democracy all over the globe. Not content with having invaded half the world. Displaced populations via slavery and moved others onto plantation islands. Deporting an entire nation of Chagos islanders as recently as the 60s. To make it an art: to really cement the United Kingdom as the arsehole of the world it really has to go over and above the call of duty. A day after the Lords committee found UK weapons sales to Saudi Arabia unlawful, Jeremy Hunt was in Germany chastising the German foreign minister, Heiko Maas. (2)

“I am very concerned about the impact of the German government’s decision on the British and European defence industry and the consequences for Europe’s ability to fulfil its Nato commitments.” — Jeremy Hunt (3)

Saudi Arabia, let’s not forget, is a barbaric theocratic dictatorship waging an incredibly violent war on Yemen which is causing a famine of 7 million people.

As The West Gears Up For Regime Change In Venezuela, The Yemen Crisis Is Completely Absent From Mainstream Media

The Yemen crisis was started by Saudi Arabia to gain hegemony over Iran. It is supported by the West because Iran is also their enemy whilst the Saudis are servile to the west. What started as a “quick win” became a protracted war that the Saudis now can’t extricate themselves from. 14 Million people could soon be dependant on aid for food. The famine in Yemen is becoming one of the worst in living memory. (4) The difference between the famine in Yemen and the economic crisis in Venezuela could not be more stark. You do not have to do much research into Yemen to see thousands of pictures of starving children, whose skin is stretched taut over their bones. Yet the economic crisis in Venezuela which is in no way comparable fills our media with a call to action “to oust the dictator Maduro”. There are no similar calls to oust Mohammed Bin Salman, who orders journalist executions with bone saws. The IMF being that organisation that goes into third world nations offering loans to countries and when they’re in enough debt forces them to enact neoliberal economic policies. Sell off all your public assets that can be snapped up on the cheap by foreign multi-nationals and enforce austerity on your population. Whereas regarding action in Yemen the UK government could take a series of actions to stop the crisis. The Saudis, fundamentally, cannot operate or run air bombing campaigns without US And UK support on Yemen. The UK and US have the ability to end the war. But instead they choose not to. According to a UN report in 2016 “ At least 7.6 million people, including three million women and children are currently suffering from malnutrition and at least three million people have been forced to flee their homes.”(6) Report further stated and outlined the litany of war crimes the “Saudi-led-coalition” is committing in Yemen.

“The perpetuation of the conflict and its consequences on the population in Yemen are devastating,” the report states. “The international community…has a legal and moral duty to take urgent steps to alleviate the appalling levels of human despair.” The report contains examples of the kinds of possible violations of international humanitarian law and international human rights law that have occurred between 1 July 2015 and 30 June 2016, including attacks on residential areas, marketplaces, medical and educational facilities, and public and private infrastructure; the use of landmines and cluster bombs; sniper attacks against civilians; deprivation of liberty; targeted killings; the recruitment and use of children in hostilities; and forced evictions and displacement. In several of the documented military attacks, the report states that the UN Human Rights Office was unable to identify the presence of possible military objectives. “In numerous situations where military targets could be identified, there remain serious concerns as to whether the incidental loss of civilian life, injury to civilians and damage to civilian objects that could be expected from the attack were not excessive in relation to the anticipated concrete and direct military advantage apparently sought,” the report states. Stalinism denied workers’ democracy, and self-determination for nationalities. Yet, despite the Stalinist regimes, the planned economy provided free health care, jobs and cheap rent. All this has been destroyed by the new war mongering, Mafia-capitalists.”(Kosova: One year after Nato’s war, The Socialist newspaper, 3 March 2000)

The UK is part of a consortium manufacturing jets and other armaments alongside Italy and Spain. The German ban on selling the Saudi’s arms is having an effect on BAE’s ability to supply arms to the Saudi’s as they are reliant on the German manufacturer, Rheinmetall, to provide components. Such a naked display of lobbying for the bourgeois interest on behalf of the arms industry shows the ease of corruption in the UK. Rheinmetall, for their part, are currently trying to sue the German government for the ban. (7) Every effort must be raised to defend Venezuela from the disaster capitalists that wish to see it reduced to rubble ala Libya/Iraq or Syria. As if the dodge criminals like Trump, John Bolton and Elliot Abrams are respectable leaders in concern of the Venezuelan population and not mafioso’s in suits. At the same time our voices opposing war and arms sales to Saudis who have time and time again targeted civilians and civilian infrastructure who are acting in a 15th century mentality to colonise the people of Yemen. sources (1) https://www.reuters.com/news/picture/hunger-in-yemen-idUSRTR2XWHA (2)https://www.theguardian.com/world/2019/feb/16/uks-saudi-weapons-sales-unlawful-lords-committee-finds (3)https://www.theguardian.com/world/2019/feb/20/jeremy-hunt-urges-germany-to-rethink-saudi-arms-sales-ban (4)https://www.theguardian.com/world/2018/oct/25/famine-in-yemen-could-become-one-of-worst-in-living-memory-un-says (5)https://www.globalresearch.ca/the-making-of-juan-guaido-how-the-us-regime-change-laboratory-created-venezuelas-coup-leader/5666971 (6) https://www.ohchr.org/EN/NewsEvents/Pages/DisplayNews.aspx?NewsID=20411&LangID=E (7) https://sputniknews.com/analysis/201902221072664158-arms-germany-uk/